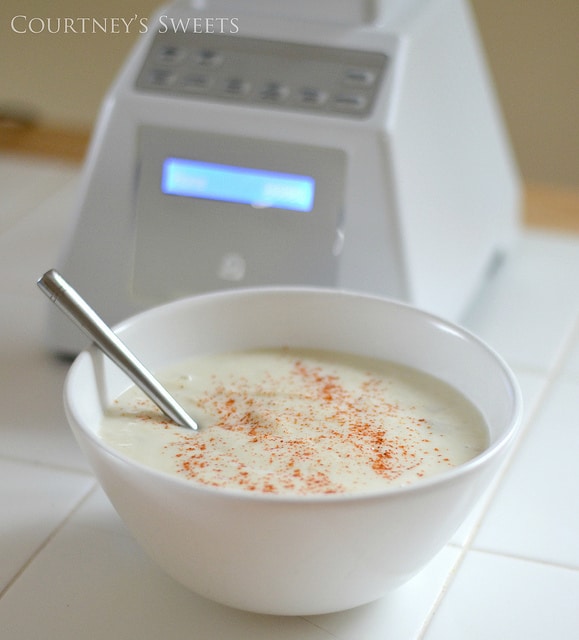 I can’t believe I found my kitchen again!  Although I must say as much as I have missed baking/cooking, it’s been great to get away for the reason I have.  I wouldn’t trade all those snuggles and naps with Sweet Baby for anything.  I still can’t spend too much time in the kitchen so everything I do has to be quick, easy, and delicious of course!

It’s getting colder outside so I was craving a rich and creamy soup.  I love cauliflower and sometimes I even add broccoli into this soup.  One thing I love is that whenever I have leftover potatoes from the previous night or even make too much I can reserve it for this recipe.  This is one of my favorite soups.  I even had to delay cooking and  finishing because the baby needed me. So while I had to refrigerate the mixture before blending it all up it still turned out perfect thanks to my blender.. More on that tomorrow!
Spicy Cauliflower Soup
1 Head of Cauliflower
1 Small Onion
3 Gloves Garlic
2 Cups Milk
2 Cups Low Sodium Chicken Broth
4 Ounces Cream Cheese
Pinch of Pepper, Thyme, and Parsley
1 Large Potato, (previously cooked. Boiled, baked)
*Cayenne Pepper
Chop up cauliflower into florets, slice onion into fourths, and peel garlic.  Place into saucepan with milk, broth, cream cheese, pepper, thyme, and parsley.  Cook until the cauliflower is tender.  Allow to cool slightly and then place into a blender.  Puree the soup until it’s liquid.  Once the soup is smooth add in your precooked potato pulse just a few times as you want there to be potato chunks.  Pour into a bowl and sprinkle with cayenne pepper to taste!  * I never add to the entire soup as some like it more mild.