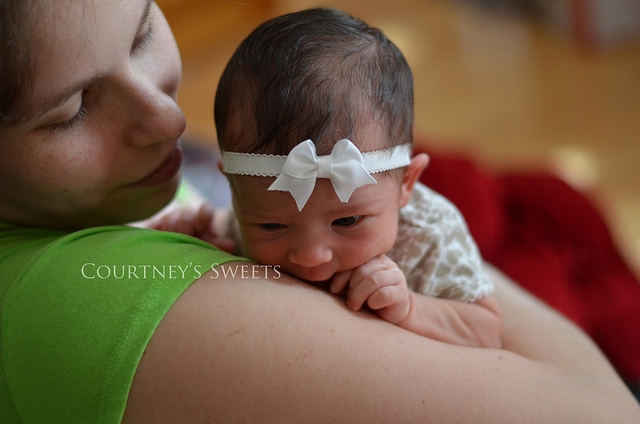 Day 1. Right after giving birth to my daughter they quickly cleaned her up and let me nurse her for the first time.  Her eyes closed and would open every so often to look up at me.  This is the baby that I held inside for 9 months, and she needs me as much as I need her.  I provided nutrition for her for all those months, and to know that I can provide for her now is just a blessing.   Once we bonded for about 45 minutes they took her upstairs for her first bath.

I had to wait in Labor and Delivery for about an hour before going up to my room.  When I finally was placed in my room Mikaylee came in about 20 minutes later.  Chris scooped her up and just admired her, and then gave her to me so I could nurse her again.  My nurse came in to introduce herself and said that my daughter was nursing beautifully.  Could I have had a beautiful latch from the beginning?  I’m really not sure as I was still in pain from just giving birth and just so exhausted not sleeping in over 27 hours.  She finished nursing and then we placed her in the bassinet and all of us slept for about 2 hours until a new nurse came in to see me.  Her first words were “Good morning mommy, it’s time to nurse.  I heard your daughter is doing excellent”.

I placed my daughter in the cradle position and she began to nurse, but only for about 5-6 minutes.  Throughout the day she would keep nursing periodically for short amounts of time.  At this time I was only producing colostrum. Unfortunately she wasn’t having enough wet diapers so they were concerned, and in turn that also concerned me.  Her pediatrician finally comes to visit and settles my fears by saying “She’s brand new to this kind of living.  For 9 months she was fed through the umbilical cord, and now she needs to learn how to adapt to her new feedings.  It takes time, and please don’t let the nurses worry you.  You’re doing great”.

Day 2.  She went 24 hours with only 1 wet diaper. During the next nurse change we had someone who I hope I never meet again.  She told me she had to stimulate my daughter to have a bowl movement, which I was totally fine with as the doctor said it was okay.  She then came to me and told me that I wasn’t providing enough nourishment for my daughter, and that I HAVE to give her formula.  I told her my views, and she began undressing Mikaylee and continued on by trying to wake her up so I could nurse her.  Mikaylee just wasn’t interested in nursing, yet she kept provoking her.  She would scream and cry and then fall right back to sleep.  When she left I nursed her about an hour later for a few short minutes until she drifted off and then we nursed every two hours during the night.

Shift change, new nurse!  Breath of fresh air?  Not necessarily.  Only 1 more wet diaper and they are really worried.  So they bring in the formula and say you must give this to your daughter, she’s starving.  I begin to cry thinking that I’m actually hurting my daughter instead of doing what is best for her.  It was later in the evening where the nurse said she called my daughter’s doctor and that we have to start to supplement.  Since it was too late for me to call him I had no way to contact him about this.  I finally decided I would give the formula to her.  I cradled her in my arms and brought the nipple to her lips, and as she looked at me I felt so defeated, but she wouldn’t take the formula!  My daughter refused!  I tried for about 15 minutes and then we gave up and called the nurse in.  That where she said “You just don’t want her to have it, let me try”.  I was appalled  What?! Are you serious?  My husband was worried because of all the concerns they filled our heads with and said let her try.  Well, she force fed my baby through her cries.  FORCE fed a few sips that weren’t even enough to log down in her chart.  What proceeded after?  Her tummy contents all over.  She threw up the teaspoon amount that she took of the formula and the colostrum she had gotten from me.  Every nurse would wake us up to breastfeed and would agitate Mikaylee.  Pulled off her clothes, wet her, put pressure on her, and kept grabbing my breast and shoving it in my mouth.  I finally had enough!

Day 3.  A new day.  Another ignorant nurse.  This one actually brought more formula in and said we have to give it to her “doctor’s orders”! So I then called her doctor about the experience.  He told me to not listen to them, that I’m doing absolutely fine.  He wasn’t telling him this.  He told me don’t worry only a few more hours until you go home.  So he had us schedule a visit with a lactation consultant.  This way they couldn’t push the formula.  Finally, help!  They brought me in the Medela Symphony Breastpump to use so that when Mikaylee didn’t want to nurse I could pump every 2 hours for 15 minutes.  The LC was impressed by the amount that I got after each pumping, but told me to give her what I pumped right after as a supplement.  She didn’t really want much after nursing, maybe a fourth of an ounce.  I was then told I should rent the pump.  She accessed my latch and said it looked good.  As we were leaving a new nurse comes in and is as sweet as can be.  Tells me all about her experience, and even gave me hope!  So sad we only had her for a half hour!

Time to go home!  Ahh, sweet relief.  Usually one would be scared to go home, but after being woken up every 1.5 hours for the last 3 days by a nurse and not my daughter definitely drains you.  Now our journey can finally begin.  When we brought our daughter home she had a wet diaper, and then another!  She had 3 wet diapers the night we brought her home.  Chris and I could not have been any happier!

The post Breastfeeding: The Beginning appeared first on Courtney's Sweets.